It’s hard to imagine what life was like before telephones or television; to remember what we did without computers, the internet, and even Google. It’s especially hard for most of us to imagine life before cars, movies, and the advent of electricity. In the late 1800s, people received their information by word-of-mouth, letters, telegraph, and newspapers. 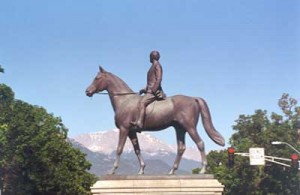 General Palmer, the founder of Colorado Springs, included North Park in the original plat of the City in 1871. As the City was built around the Downtown area, North Park soon was known as Acacia Square (derived from a Greek word meaning ‘thorn trees’). It became a public gathering place for meeting friends, and sharing ideas and news bulletins.

There was a bandshell for musicians, outdoor lighting, and its almost 3.5 acres provided an expansive carpet of grass on which to stroll. There were walking paths, benches to sit and visit, and large shade trees. One city block square, when announcements needed to be made that affected the town, people congregated in what we now know as Acacia Park to get their news. Originally known for a short time as Fountain Colony, and often referred to as The Newport of the Rockies, Colorado Springs became an upscale hub of modern civilization, with Acacia Square at its core. Europeans and Easterners were attracted here in droves, and Colorado Springs was often called “Little London.” All the while, Acacia Park was the central gathering place for information and declarations.

Today it is still a gathering place – for speakers, musicians, children, protesters, artists. It is still a place to meet friends, take a break, and a great place to people-watch. And with a statue of General Palmer (Man on the Iron Horse) in the intersection overlooking his park, it is still considered the hub of Colorado Springs.