A friend in New England recently lost electricity for several days.  I thought it was a good thing it was summer and not winter, even though the lack of running water became an issue. But it got me thinking about the Victorian Homes I love so much, most of which were built before the advent of the common use of electricity in homes. 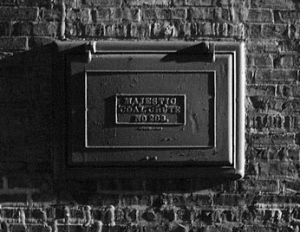 Almost all of the Victorian houses I sell have a coal chute, usually along the alleyway or a driveway. Even now, the City has an easement on most of those alleyways that was deeded in the late 1800s. The chute, generally located in the foundation wall, was commonly a hinged door, normally made out of metal because the coal was damp and would freeze during transport. The door would open to an angled tunnel.

Each week the Coal Trucks delivered the week’s fuel through these angled openings. They would dump the coal into a room that was specially designated to hold it, usually in the basement next to the furnace. To this day, the walls of those rooms are stained black.

If you didn’t have a coal chute, then the coal was carried to the basement in a wheelbarrow, or men were hired that carried it in bags to the basement. They were called “Lumpers” (because they carried lumps of coal).

There was an invention made by Robert Riley called a Riley Stoker. Mr. Riley manufactured Boilers, and he invented a covered conveyor machine, green in color, where the trucks could dump the coal into a hopper inside the chute. Then an auger-type system would transport the coal directly from the hopper to the furnace without the homeowner ever having to shovel or touch the coal. Those were found, more often than not, in larger Victorian homes where the owners were wealthier. 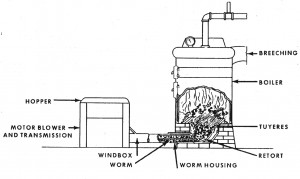 It was common for the elements to enter through this metal hatch, and often the foundation walls will have century-old water stains beneath the chute. While you, of course, should always have an inspection when purchasing any home, these stains are not generally something that would be a cause of concern in your turn-of-the-Century purchase.