In the late 1800s and early 1900s, there were few households that were not affected by the dreaded disease of tuberculosis. Called Consumption for many centuries because of the way severe weight loss appeared to consume the patient, it was also referred to as The White Plague due to the extreme pallor of its victims. At the beginning of the twentieth century, one in seven deaths in Europe were attributed to tuberculosis. 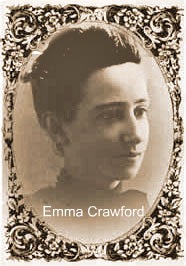 In 1889, Emma Crawford was a courageous but frightened seventeen year old, engaged to be married but suffering from an illness that showed no favoritism. As did many hundreds of others, Emma and her family moved to Manitou Springs in hopes that the healing waters of the Springs and the dry mountain air would cure her. Being Spiritualists, Emma and her mother believed that Native American spirits were guiding them, and they walked constantly through the hills outside of Manitou from their home on Ruxton Avenue.

She had a fearful aversion to cemeteries, and on one of her adventures to the summit of Red Mountain, Emma, being led by her spirit guide, had a vision. She tied a scarf around a tree where her guide appeared to her, and let it be known to her family, if she should succumb to this illness, that was the location where she wanted to be buried.

She was feeling better after the move to Manitou, so Emma’s fiance, William Hildebrand, an engineer on the Pikes Peak Cog Railway, joined her. They threw themselves into planning their upcoming nuptials, but sadly, they would never make it to their wedding day. At the age of nineteen, on December 4, 1891, Emma became yet another victim of the unmerciful disease.

Fulfilling his promise to his fiance, William and eleven other hearty men transported her body to the 7,200 peak of Red Mountain, a trek that took two days carrying a heavy coffin. Over the years, many spiritualists would hike to the location in an attempt to communicate with the spirit that had been Emma Crawford. In 1912, a railroad planned to put tracks over the area where her body lay, and the company relocated her somewhere down the mountain. The railway and an inept relocation were both abysmal failures.

A severe thunderstorm in 1929 caused widespread erosion on Red Mountain, and Emma’s coffin broke apart in the force of the slide. Her skull and many of her bones were found in the canyon by hikers, who took the remains to City Hall. It’s unclear exactly what happened after that. Some say her bones remained at City Hall while they tried to find surviving family members. One of her pall bearers claimed the body after two restless years and had her buried in Crystal Valley 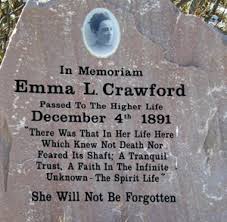 Cemetery in Manitou Springs in an unmarked grave. Some claim that Emma gently haunts her original summit burial place, and won’t rest until her remains are returned to her chosen plot.

Less than fifteen minutes from Downtown Colorado Springs, Manitou started honoring her with the Emma Crawford Festival in 1994. On Friday night of the week preceding Halloween, the Emma Crawford Wake is held for her every year at Miramont Castle, a tubercular sanatorium in the late 1890s. On the following day at noon, the Emma Crawford Parade and Coffin Race is held on Manitou Avenue. The Parade is led by hearses, and the coffin races follow, being judged on creativity, originality of design of the coffins and costumes, and on speed of the racers. There are five participants on each team – Emma in her coffin and four mourners. The racing wheels on the coffins can be no more than six inches in diameter.

The City of Manitou Springs honored Emma with a memorial headstone, and every year they celebrate their biggest annual event in an irreverent and celebratory pre-Halloween Festival. Come join the fun and craziness that is the Emma Crawford Festival. 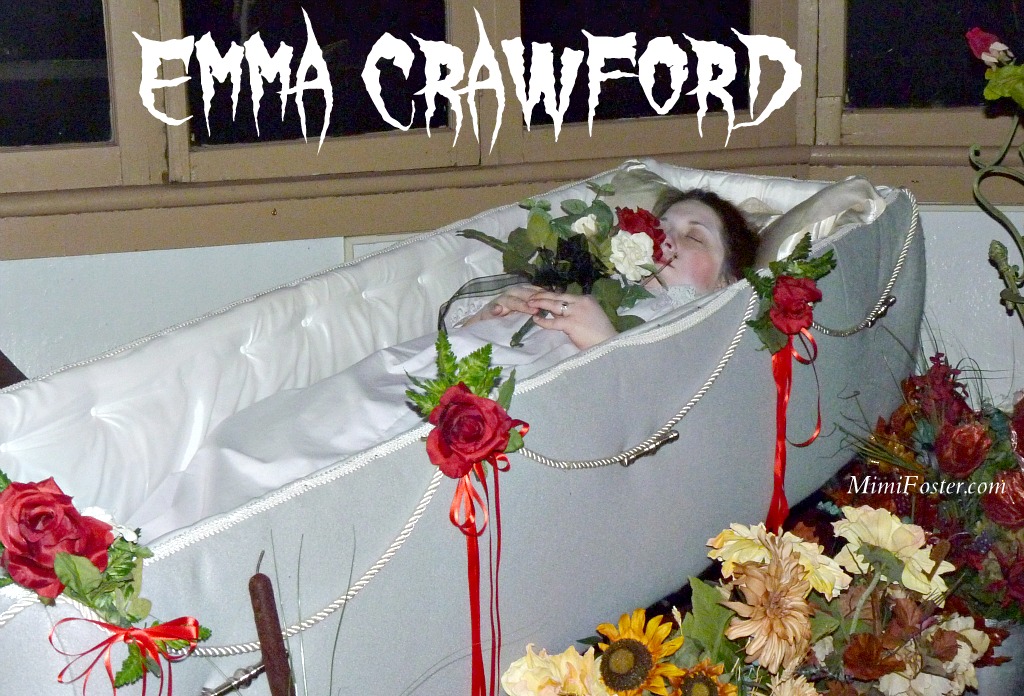