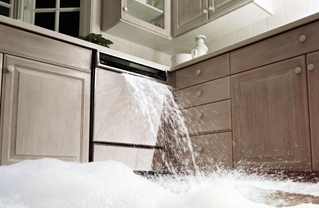 There’s not much my husband can’t fix, so when the dishwasher broke at one of our Colorado College rentals, it was not a problem for him to take care of it.  A few days later, he was called back for the same difficulty, so he tried a different repair since the first one had obviously not been successful. After four such service calls, we decided there was evidently something wrong with the dishwasher and replaced it with a new one.

Two days later we got the same call – water and suds pouring out of the dishwasher all over the kitchen floor. It occurred to me that our ‘best and brightest’ college students are not smart enough to know that Dawn is not designed to be used in automatic dishwashers.

For more stories about Colorado College rentals, be sure to check back often for more Tenant Nightmares.