Have you ever wondered why, when you drive in Downtown Colorado Springs, you often see very large homes next to little cottages? Back at the turn of the 19th Century, homeowners in Downtown Colorado Springs had larger lots and close-knit families.  When a daughter married, often a father would build a home on part of his property so his daughter would not only have a house to live in, but it insured she would continue to live nearby as grandchildren were born. 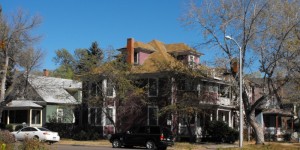 Such was the case of the gentleman who owned 304 East Monument Street (on the Northeast corner of Weber and Monument Streets – built in 1899).  He had two daughters and a large lot.  When they grew up and got married, he built them each a house on either side of his own home – 707 North Weber (built in 1909), and 308 East Monument Street (built in 1910).  Crazy lot lines and irregular lot shapes attest to the fact that, in the early stages of Colorado Springs, handing over property to relatives was not an exact science.