Crazy Man with a Gun

I suppose every town has them – the ones who function below par, the homeless, the crazies, the people who don’t fit in.  We have our share, and if you are in Downtown Colorado Springs very often, you get to know a lot of them by site, and you get to be familiar with their idiosyncracys.

One such gentleman in our town loves to dress in different costumes.  I have seen him for years, and I have often been amused by who he is portraying on any particular day.  He is well known and well loved by the people who have had contact with him.  One day about two years ago, I was coming out of a dress shop on the main street Downtown.  There were at least twelve police cars in the middle of the street, doors open, there was no traffic, and guns were drawn all around me. 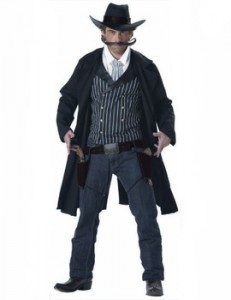 It was with horror that I realized that the guns were all trained on one lone man who stood there brandishing a pistol, huge mustache covering the lower half of his face, and a cowboy hat riding low on his head.  As I jumped back into the store, we could hear the police screaming at this ‘bandit’ to PUT DOWN THE GUN! PUT DOWN THE GUN! as he continued to wave it in the air.

A young officer was able to come up behind him and tackle him to the ground.  When he pulled off the hat and the phony mustache and realized that the gun was plastic, and that it was this sweet and unstable Downtown regular that everyone knew, the young officer on top of him had tears streaming down his face and kept yelling at him, “Do you realize you almost died just now over a TOY?!  WE ALMOST KILLED YOU OVER A TOY!”

I have seen this man many times since then, always in a different costume, always so friendly.  Every time I see him, I think about so many things: how fragile life is, how glad I am that the police held their fire, how big some misunderstandings are, and that it is our DIFFERENCES that make life interesting.   I’m sure there is some deep philosophical moral to this story, but tonight that is for YOU to apply. 😉

1 thought on “Crazy Man with a Gun”