Dolls, Buddha, and the Virgin Mary

One of the lines I commonly use when taking a listing is, “How you live in your home is different than how you market your house.” It’s a difficult concept for some Sellers to grasp as they are often attached to their ‘collections.’ 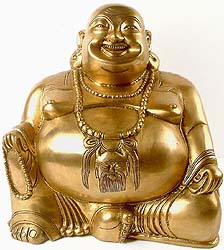 One of my Sellers thought I was being offensive when I told him that ALL of our feedback concerned the negative impact his Buddhas (in every available corner of his home) were having on his showings. I tried to explain that it had nothing to do with religion, and everything to do with the fact he was marketing his home. It was difficult for people to see his home because they were so engrossed with how many Buddhas you could fit into so many spaces.

One of my listings had a life-sized Virgin Mary in the entry (which was a little frightening as you opened the door), and little statues in each room of the house. It’s often difficult for prospective Buyers to see past these kinds of things, and when I asked my Seller to remove them while the house was on the market, she insisted that she needed the ‘blessing’ that came from having them there.

But the most difficult one I had was the neighbor whose home I listed that collected and made life-like dolls – down to and including putting in eyelashes and real hair. The master bedroom was upstairs at the end of long cat-walk hallway overlooking the family room and kitchen below. The room along the hallway before you got to the master was supposed to be a bedroom, but had become the DOLL ROOM. Honestly, the most common feedback we got was that they never even got to the master bedroom because The Brides of Chucky freaked out the prospective Buyers so much that they just left. Because they were so life-like, their eyes appeared to follow you when you walked. 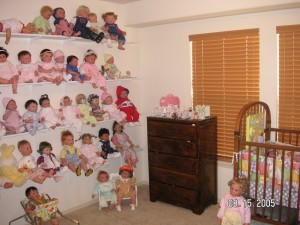 Mrs. Seller would not, under any circumstances, pack them in boxes because they would be scared and lonely if they were put away (emotional issues?). I begged her to at least put them on the bottom level of the house so people could fall in love with the house before they encountered the dolls. She allowed some of the dolls to be taken downstairs (after a lot of cajoling), but the attached picture is how the room looked after we had removed several hundred dolls from this room, and three of the four walls in the room looked like this. This beautiful, well-priced home took forever to sell because of these dolls, but it was hard to convince the owners that other people would not feel the same way about their collection.

What I fervently want to convince Sellers of is that people have to be able to see themselves in your home. We need you, Mr. and Mrs. Seller, to emotionally detach from your house to be able to get a Buyer attached enough to make it their home. You are going to be moving anyway – start packing!

2 thoughts on “Dolls, Buddha, and the Virgin Mary”