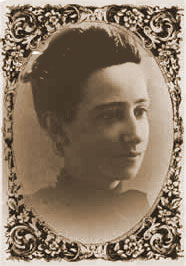 It must have been frightening to be 17, engaged, and suffering from the dreaded disease of tuberculosis.  Emma Crawford was courageous of spirit, and in 1889 she and her family, as did many hundreds of others, moved hoping the dry mountain air and the healing waters of Manitou Springs would cure her consumption.

Emma and her mother were Spiritualists, and both believed that Native American spirits were guiding them.  Emma lived with her family on Ruxton Avenue, and walked constantly thru the surrounding hills of Manitou.  On one such journey up Red Mountain, Emma Crawford had a vision.  With a frightful aversion to cemeteries, Emma tied a scarf to a tree near the summit where her spirit guide had appeared, and made it known that if she died, that was the location in which she wanted to be buried.

Soon after the Crawfords moved to Manitou, Emma was joined by her fiancé, William Hildebrand, a railway engineer on the Pikes Peak Cog Railway.  Feeling better, Emma and William threw themselves into their wedding plans.  But it was not to be.  On December 4, 1891, at the age of 19, Emma Crawford succumbed to her disease before she and William were married.

Being true to his promise, William and eleven other hearty men took two days carrying Emma’s coffin to the 7,200 foot peak of Red Mountain.  The location became a popular spot for spiritualists to hike to see if they could communicate with Emma’s spirit.  But in 1912, a railway company decided that they wanted to put tracks through that area of the mountain, and relocated Emma’s body.  The relocation and the railway were both failures.

Because of inept burial and erosion, Emma’s coffin washed down the side of Red Mountain in August, 1929 in a severe rain storm.  In the slide’s force, the coffin broke apart, and Emma’s skull and other bones were discovered in the canyon by young hikers who took her remains to City Hall.

While there are several versions of the story, one says that Emma’s bones stayed at City Hall while officials tried to find surviving family members.  After two restless years, her skeletal remains were claimed by one of her pall bearers, who had her buried in an unmarked grave in Manitou’s  Crystal Valley Cemetery.  Some say that Emma Crawford gently haunts the hills of Red Mountain and won’t rest until she is again buried in her chosen resting place at the summit. 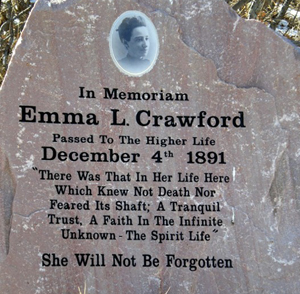 In 1994 the City of Manitou Springs started honoring her with the Emma Crawford Festival.  On Friday night of the weekend prior to Halloween, the Emma Crawford Wake is held every year at Miramont Castle, a sanatorium in the late 1890s for tubercular patients.

The following day, Saturday at noon, there is an Emma Crawford Parade and Coffin Race down the main street of Manitou, led by hearses.  The races immediately follow and are judged on not only speed, but on the creativity and originality of design of the coffin and costumes.  Each entrant in the race has five participants ~ one who portrays Emma in her coffin, and four mourners who race the coffin, the wheels of which cannot be more than six inches in diameter.

Ten years after the Emma Crawford Festival began, the City of Manitou Springs honored her in 2004 with a memorial headstone.  This is an irreverent, celebratory, pre-Halloween festival that is one of the biggest events of the year in Manitou Springs, just 15 minutes from Downtown Colorado Springs.