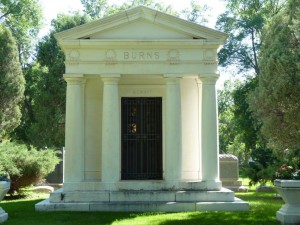 Colorado Springs is a City established in the shadow of Pikes Peak in 1871. The first cemetery in the City was located not too far from where people disembarked from the trains as they arrived in town. Because General Palmer, the founder of Colorado Springs, was touting the City for its health benefits, it was a little disconcerting for people arriving to have the El Paso County Cemetery house more people than those living in the City itself.

So in 1875, the philanthropic General Palmer donated forty acres to locate the new cemetery ten miles east of the City. Originally called Mt. Washington Cemetery, the property was deeded to the City in 1876, and the name was changed to Evergreen Cemetery shortly thereafter. 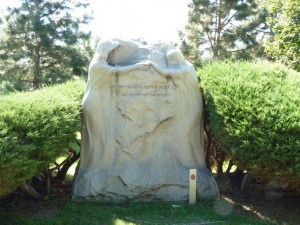 After the gold rush in the early 1890s in nearby Cripple Creek, the influx of money saw Evergreen Cemetery became home to enchanting mausoleums and impressive monuments. With its rolling verdant hills and breathtaking Pikes Peak views, it became an outdoor oasis, prompting people to decorate the gravesites with rose-covered trellises.  So impressive was the beauty of Evergreen Cemetery that Ripley’s Believe It or Not deemed it the ‘largest outdoor rose garden in the world.’

On the southeast corner of Hancock and Fountain, Evergreen Cemetery is still an oasis in which to wander and ponder in the crisp Colorado Springs mountain air.