I can’t think of a more appropriate setting than Nederland, CO to host the annual Frozen Dead Guy Days. A land where Hippies grow old, Nederland is just a few miles outside of Boulder, CO, but is a small, secluded, remote, mountain town. 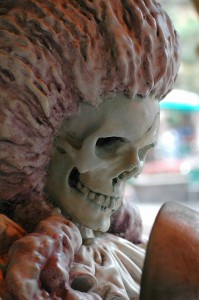 In the late 1980s, Trygve Bauge of Norway packed the body of his grandfather, Bredo Morstol, on dry ice and brought him to the United States, where he was subsequently preserved in liquid nitrogen. Returning him to dry ice in 1993, Trygve and his mother, Aud, moved dear old granddad to Nederland where they planned to create their own cryonics laboratory. It was a downer when Trygve, according to the terms of his visa, overstayed his welcome and was deported.

But reality is, it would take someone that was a little loopy to be carting around the body of her father, and Aud was no exception. Local ordinances in Nederland require plumbing and electricity for someone to inhabit a house, and it seems that Aud received an eviction notice for not complying. Fearing that her father would thaw out if she was evicted, she talked to a reporter who talked to City Hall, which caused quite a degree of excitement.

All of this ruckus produced a new law in Nederland, one that now outlawed keeping a person, animal, or any other kind of living species, all or in part, whole or in pieces, in any kind of domicile. But Aud had made the town famous, and so they allowed her to keep dear old dad . . . ‘grandfathered’ him in, so to speak. Trygve planned to have someone continue to keep dear old granddad on dry ice, and a Denver radio station and a Tuff Shed dealer donated a new shed to keep Bredo in.

In 2002, some enterprising soul decided to celebrate Frozen Dead Guy Days, and it is now celebrated the first full weekend in March each year, from Friday through Sunday. Some of the events that take place during this drunken brawl of a rowdy weekend include a tour of Grandpa’s Tuff Shed, a dance called Grandpa’s Blue Ball, a polar plunge in the frozen water, pancake breakfasts and local artists’ markets, snow sculptures, snowshoe races, Frozen Dead Guy look-alike contests, coffin races, a slow-motion parade, and the ever popular movie, Grandpa’s in the Tuff Shed.

When daughter Aud found out that someone was making a profit on dear old dad, she wanted a piece of the action. When it was explained that she had no business to the revenue, she punched someone in the nose. She was asked to leave town about six years ago, and hasn’t been seen since.

The locals dread the weekend. A sleepy little town of about 1,500 people, over ten thousand people will descend on this haven to celebrate “Grandpa Bredo.” As you can only imagine, it is a long, drunken weekend of people who make a mess and cause disruption, and then leave as quickly as they came. If you’re in the area, you might enjoy some of the festivities.

Most of the locals will tell you that Grandpa Bredo has gotten warm several times over the years. Not a pleasant thought. But at the very least, you can try the Frozen Dead Guy ice cream made by Glacier Ice Cream in Boulder. Deliciously creepy, it’s made of fruit-flavored blue ice cream and stirred with crushed Oreos and sour gummy worms.

The following video is of the quaint town of Nederland. Jerry Garcia of the Grateful Dead was a big fan of this sleepy town. Here he sings a 1971 song with Grace Slick, David Crosby, and Paul Kantner.