Garden of the Gods

Recently I had the pleasure of attending an afternoon Vintage Baseball Game at Rock Ledge Ranch in the beautiful park of Garden of the Gods in Colorado Springs CO. 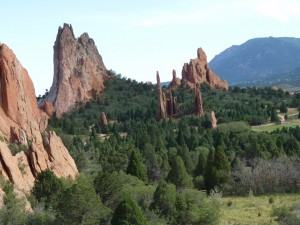 When the baseball game was finished, I ventured out to explore the awe-inspiring sites that are second to none in this 3,300 acre park. Even though it is at an elevation of approximately 6,500 feet, Garden of the Gods is very easy to hike. They allow some climbing, and you can also drive through the park and get out and walk at different pull outs.

Garden of the Gods is one of the most amazing geological formations anywhere that I have ever seen, and there are often not even words to describe it. Every day at 10:00 am and 2:00 pm there are guided tours by naturalists who present fascinating subjects of interest about the flora and the history and the rattlesnakes and the lore concerning this enrapturing park. 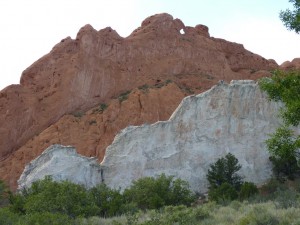 In 1859, they discovered gold in nearby Southpark, CO. Over 100,000 people flowed into the area in the excitement that was a Gold Rush. Two surveyors came down from Denver City, looking to establish nearby Colorado City, when they encountered this magnificent location. Legend has it that one suggested it would make a good Beer Garden. The other, a poet at heart, said rather it was a place for the gods to assemble, and should therefore be named Garden of the Gods. And so it became. And so it still is.

You can probably identify some of the most common rock formations in Garden of the Gods in the following video ~ Kissing Camels, Balanced Rock, Ship Rock, and, of course, the ever popular Phallic Rock. I hope that you will enjoy sharing some of the magnificence of our local landscape. I know of nothing like it anywhere else in the world.