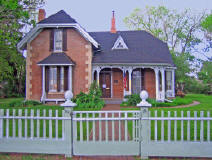 The McAllister House in Colorado Springs is the oldest home in the City.  Easily overlooked as you drive down tree-lined Cascade Avenue with its beautiful Victorian and Edwardian homes, this 1873 Gothic-style English Cottage has been lovingly restored inside and out, and is now a Museum and Gift Shop open to visitors, groups, school tours, and teas.

Major Henry McAllister served as a Union officer, fighting to abolish slavery with General William Jackson Palmer, founder of Colorado Springs.  Both men were Quakers from Delaware, and when General Palmer decided to head west to build his railroad, Henry enthusiastically agreed to relocate with his wife and young son. Two daughters were born to he and his wife, Elizabeth, after they moved to Colorado Springs.  As the Executive Director of the Colorado Springs Company, he was instrumental in helping to establish Fountain Colony, now known as Colorado Springs.

Upon arriving in a land that was completely different than anything he had ever known, gale-force winds howled through the station and blew the train from which he had disembarked over on its side.  Impacted by this event and with a desire to protect his family in this new frontier, while others were building temporary housing, Henry McAllister built his brick home at 423 North Cascade Avenue in Downtown Colorado Springs to last several lifetimes.

With a beautiful view of Pikes Peak, he was intimately involved in the construction of the McAllister House. He worked closely with George Summers, who was also, at the time, designing Glen Eyrie for General Palmer.  Sixteen-inch-thick walls and steel beams from the basement to the roof insured that the McAllister House would not only be one of the first houses to stand in the City, but also one of the last.

Henry McAllister’s focus was to find buyers for the resort City of Palmer’s dreams.  As Quakers, he and Palmer worked tirelessly to keep Colorado Springs a ‘dry’ city, which it remained until the repeal of prohibition in 1933.  A strong believer in women’s rights, 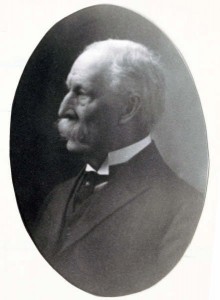 Henry was on the Executive Committee of the Colorado Women’s Suffrage Society.  Charismatic, he could hold the attention of a crowd for extended periods.  Persuasive, he was instrumental in convincing the Congregational Church to build Colorado College in Colorado Springs instead of Denver as they had originally intended.

Henry lived in the McAllister House until his death in 1921.  In 1961, the home and land were purchased by the National Society of the Colonial Dames of America of Colorado (NSCDAofCO).  The Society owns and supports historical homes throughout the US.  One of the purposes of NSCDA is the preservation and restoration of distinctive homes.  The interior and exterior of the McAllister House have been graciously preserved, and authentic period furnishings help to make this a landmark for future generations.