In 1969 I was a typical sixteen year old of the era. Tall, skinny, waist-length straight hair, I wanted to be flamboyant and shocking. My boyfriend was in Viet Nam. His brother Chuck was my best friend. Chuck and I wanted to join in a Viet Nam Memorial Day Protest Rally that was taking place in Tampa, a neighboring city. I thought I was so clever as I worked diligently making the sign I would carry. It said, “Fighting for Peace is Like F*cking for Virginity.” 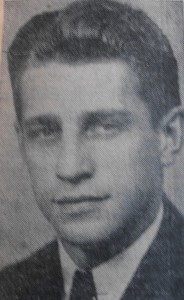 I loved my father. A decorated Veteran of World War II and Manager of the Veteran’s Administration, he was a quiet and compassionate man. When I think of him, I remember how he smelled, his tender hugs, how handsome he was, his gentle smile. My mother always said he was never the same after he came back from the War, but that meant nothing to a sassy young girl at the height of Viet Nam. The reality was, at sixteen I didn’t understand the unique parts that made up the man that was my father.

We lived on “The Pink Streets” in St. Petersburg, FL.  A few blocks from Tampa Bay in an exclusive and secluded area with moss covered trees and tranquil Southern gentility. St. Petersburg had a saying: “People retire to Miami and their parents live in St. Petersburg.” So you didn’t do things like protest the war because even a protest could produce the onset of heart attacks. And back then, sixty was REALLY old, and I was just beginning to live.

Thrilled with my wit and the shock value of my finished product, I proudly took my sign to show my father and Chuck. Stupefied, my father approached and removed it from my hand.

Without saying a word, he walked out the back door and headed purposefully down the street. I followed as he marched steadily toward the water with my clever work of art. At first angry, then stunned, I watched in quiet amazement as he threw my masterpiece into Tampa Bay. After standing silently for several minutes, he walked calmly home. Never previously having exchanged a cross word with him, I was blindsided by his actions, but truly and duly chastised with his silent fury.

Chuck and I didn’t attend the Protest Rally that day. Without saying a word, my father had spoken volumes about the subtleties of perception. With maturity I realize you don’t need words to teach a lesson, and the realities of war and youthful idealism cannot always be bound together to make truth.