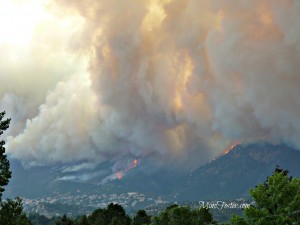 As many of you are aware, Colorado is in an apocalyptic state of fires, record breaking temperatures, and mass destruction.  After ten of the happiest days in recent memory spent in New York City for the wedding of one of my daughters (that’s for a later story), I returned home Monday to a temperature of 103 degrees and raging forest fires.

As I drove home along the Rockies, it was tragic to see the radiating flames and smoke pouring from the ridges all along the Front Range.  While it was not yet contained, it was blessedly keeping its distance from towns and cities.  Tuesday again presented with three-digit temperatures, and I spent a lot of time on my deck watching my beloved view of forests and mountains go up in flames.  There were evacuations and rumors of evacuations, but still it kept its distance.

Then a thunderstorm in a northern county caused a backlash of high winds and extreme fire balls.  Without the benefit of the associated rain, the 65 mile per hour winds in the heart of the blaze scattered destruction different directions, and fire lines that had been holding were immediately breached.  What had been a horrific fire suddenly became an out-of-control weapon of mass destruction.  We watched in horror as tongues of fire and desolation came rushing over the ridges like molten lava, threatening exclusive neighborhoods in our surrounding hills.

The threat of evacuations became immediate and urgent.  My oldest daughter, who lives but three miles away, was forced to evacuate as neighborhoods around her burst into flames.  The Air Force Academy, just a quarter mile from my home and which was the landing field for the emergency fire aircraft, was forced to evacuate much of its base housing. 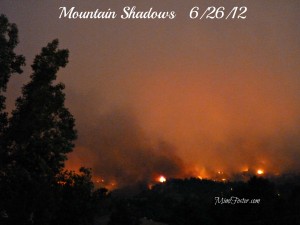 Last night as we sat again on my deck with my daughter and her family and some of their friends who had also been evacuated, we watched as structure after structure went up in flames, wondering if any of the gushing black smoke surrounding the red and orange glowing embers could be their home, their possessions.  The skyline looked like a nightmarish scene from Gone with the Wind.

The light of day brought with it the horror of the night, but also some amazing reflection.  I recently read a poignant article by Michael George about the death of his beloved wife at the age of 33, in which he talked about The Most Important Things Will Fit in a Shoebox.  As my daughter arrived with their one suitcase of belongings, and as we packed in case we would have to be evacuated at a moment’s notice, I found that what was really important in my life was what was standing around me.  All of the things that I have accumulated over the years bore no importance as the fires swept closer.  This morning I read with tears more than two dozen emails from friends (many from AR) who were checking on my welfare, and knew beyond a shadow of a doubt what was REALLY important in my life, and that my order of priorities was where it belonged.

What made its way to my suitcase was a change of clothes, some personal grooming products, a few photo albums, my computer, my phone, and my camera.  As I looked around at everything I COULD have packed, none of it mattered but the family that I loved, and the relationships that I have established.  I am, beyond measure, truly and richly blessed.