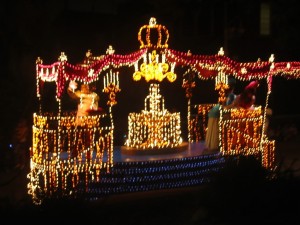 Celebrating the Holiday Season, the 28th Annual Festival of Lights Parade (also known as the Parade of Lights) will take place on December 1, 2012.  The Parade will begin promptly at 5:50 pm at the corner of St. Vrain and Tejon in Downtown Colorado Springs.  Free to the public, both sides of Tejon will be lined with revelers for the eight-block Parade route as it travels south to Vermijo.

The theme of this year’s Parade will be Home for the Holidays.  Santa will ride in a beautiful new hand-crafted wooden sleigh that has been painstakingly built over the past several months by a board member of the Festival of Lights, David Bullock.

The Parade will feature car clubs, marching bands, lighted floats, motorcycles, animals, and a vast array of floats that will be decked out in Holiday trim.  There will also be street vendors with the typical snacks, trinkets, and mementos for purchase.

This year’s Grand Marshall will be Jerri Marr.  Many of you will remember Jerri as somewhat of a local celebrity during the recent Waldo Canyon Fire.  Jerri is the forest supervisor for the Pike and San Isabel National Forests, Cimarron and Comanche National Grasslands.  She gave daily updates on the efforts of the Firefighting community as the fire spread and as it was brought under control.  She endeared herself to thousands, and they will be able to thank her properly as she leads the Parade.

Each year the Festival Committee donates to a local charity.  This year’s charity is the very-worthy Empty Stocking Fund, which transforms lives by providing resources to local agencies that help people in crisis, and assists others to attain self-sufficiency.  Every dollar given will be doubled, so bring your dollar(s) to the Parade and give it to the collection elves.

If you or your corporation would like to donate in a more grand manner, knowing that all contributions will be doubled, there are more note-worthy Sponsorship Opportunities available.  If you would like more information on the Bronze ($500), Silver ($1,000), and Gold ($5,000) Sponsorships, contact Stephen Ducoff at SDDucoff@gmail.com.