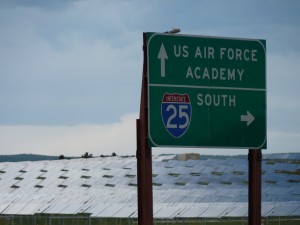 One of the wonderful results of the controversial American Recovery and Reinvestment Act of 2009 (ARRA ~ also commonly called The Stimulus Package), is that an $18.3 Million grant was awarded to the United States Air Force Academy in Colorado Springs CO to build a Six Megawatt Solar Power Plant.  They broke ground in November of 2010, and the plant became functional in April of 2011.

The AFA enlisted the aid of the Colorado Springs Utilities, who in turn hired SunPower Corp. to design and oversee the construction of the multi-million dollar facility.  The solar power plant panels have a high efficiency SunPower solar tracking system.  They follow the arc of the sun during the day at the peak, highest power usage, most expensive time at the Academy.  The tracking system is estimated to increase the capture of sunlight by 25% over conventional solar panels.

This exciting project meets the AFA state-of-the art design standards in engineering, and many of the Air Force Academy’s 4,400 Cadets were able to work on this project.  They were instrumental in such areas as determining logical, logistical placement sites, researching cyclical wave energy, and helping to keep up-to-the-minute with improvements in photovoltaic technology.

There are so many benefits to this particular solar power plant design by SunPower.  It reduces the amount of standard land usage for the panels. They only require an area of 30 acres on the 18,000 acre Air Force Academy site.  Thirty percent of their power will be supplied by these panels over the upcoming years.

There are new government regulations that federal facilities must increase their use of renewable energy, and this is a huge step for the Academy in that direction.  They have a Net Zero Initiative, which is an holistic approach to dealing with water, energy, and waste on the Academy grounds.  The goal is to have each installation be completely self-sustainable in this era of turmoil. 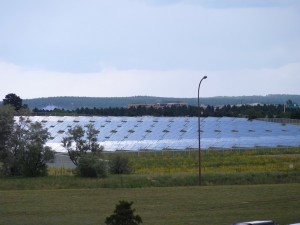 The plan of the Colorado Springs Utilities is that 20% of its energy will be produced through renewable sources by the year 2020, and this endeavor of the AFA will go a long way in helping them to accomplish this goal.  The solar panels are expected to generate the equivalent wattage of powering 1,200 average-sized homes per year.

Long ranked among the Environmental Protection Agency’s top ‘green’ power purchasers, the goal of the Net Zero Initiative would allow the Air Force Academy to generate 100% of their power from renewable sources by the year 2020.  Currently they are at 11%, and with the implementation of the new system expect to increase that to 25% in the near future.

In addition to saving more than $1 Million per year in energy costs, some of the other resulting benefits of this project included creating local jobs in Colorado Springs.  It will reduce the Academy’s demand for fossil fuels.  It will improve the air quality in the Colorado Springs area by the equivalent of removing the carbon dioxide emissions of 40,900 cars from the local highways (approximately 9,400 tons each year).

Because the ARRA paid all of the costs up front for the construction and maintenance of the panels, the Air Force Academy will receive their electricity at no cost throughout the lifetime of the facility.  SunPower will maintain the upkeep.  The AFA has 20 to 40 additional acres set aside for similar ventures as the money becomes available.