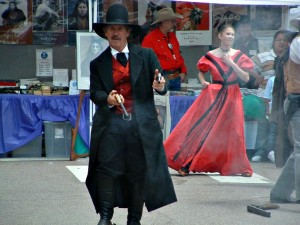 In 1859, the settlement of El Dorado became known as Colorado City. Two years later, Colorado City became the first capital of the Colorado Territory. In 1976 during Colorado’s Centennial and American’s Bicentennial celebrations, a little neighborhood craft fair, barbeque, and parade was held to honor this first territorial capital in the region.

There will be food, cotton candy, fun, crafts, pony rides, and entertainment for the whole family. For the children, there is a petting zoo, a kids’ play area, toy train rides, gold panning, and much more.  For older ‘kids’ there is a mechanical bull, Native American dancers, two beer gardens, to name but a few.  Full of period-costumed characters, this little town that has a rich Gold Rush history and beautiful turn-of-the-century architecture will host close to 150,000 revelers from across the country in this FREE EVENT.

FREE SHUTTLE:
You are encouraged to ride the FREE SHUTTLE from either Coronado High School at Fillmore Hill at Mesa, or Rock Ledge Ranch at Garden of the Gods. Provided as a service from the Old Colorado City merchants to help shield you from very expensive parking tickets and parking hassles, the FREE SHUTTLE will run every 15 minutes throughout all three days during Territory Days 2012 Old Colorado City.