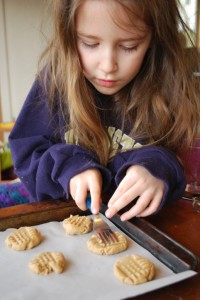 When my girls were little, I thought it was important to teach them to help people. We didn’t have a lot of money, but we had enough love to make up for just about anything.

So one Thanksgiving week we made cookies and went down to a local park where the homeless hung out. A public area and well traveled with slides and trains and kid-friendly apparatus, we spent an enjoyable morning, and the girls had a good time passing out little bags of cookies to anyone who would take them.

One such person was a man who was living in his car by the park. Scruffy, needing a shower, he sat and talked for a long while as the girls played nearby. He told me of his family back East, and how it had been a long time since he had seen them. He told me of his love for the Lord, and that while he may have some unconventional ideas, he still knew that God was with him all the time.

One thing led to another, and I invited him to join us for Thanksgiving dinner the next day. He gladly accepted, and we made the arrangements. It excited the girls that we would have company for dinner.

When he arrived I was pleased to see he had cleaned up. He enchanted the girls with stories as I looked on from the kitchen while putting the finishing touches on our meal.

We sat around the table talking, getting to know this man who looked 60 but was actually only 38, and he told us he would go to court soon and might have to serve jail time. He explained that he had been arrested for his religious beliefs and that he was being persecuted. 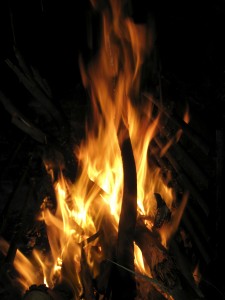 In all seriousness, he TRULY believed that the burning bush through which God spoke to Moses was a marijuana plant, and spent the next half hour explaining his heartfelt conviction that we find God by smoking pot. The police officer that had arrested him the previous week didn’t seem to be in agreement, and they had set a trial date.

In reading the newspaper a few weeks later, I found they had convicted him of possession and, if I remember correctly, he would have to serve jail time. Seems the court ruled you have to have more than one person be a member of a “church” to have it be considered an “organized religion.” He may not have been an angel, but he was a character.

Hebrews 13:2 Do not forget to entertain strangers, for by so doing some people have entertained angels without knowing it.

1 thought on “The burning bush”