By the world’s standards, he was not a wealthy man when he died in September 2004.  But Dominico T. Venetucci, known to everyone as Nick, was rich beyond measure in the love and respect of people near and far.

Born in 1911, Nick Venetucci was one of seven children born to Italian immigrant parents.  His father was a coal miner who worked to purchase a farm for his extensive family.  Working as a caddy at the Broadmoor and Patty Jewett golf courses, Nick became a catcher for the New York Yankees at the age of 22, and played for three years.

In 1936, his father had purchased approximately 1,000 acres on the south side of Colorado Springs, and the Great Depression brought Nick home to help the family work the land.  In 1942, the Venetucci’s sold 800 acres of their land that eventually became part of Fort Carson, and the Venetucci Farm became approximately 200 acres. 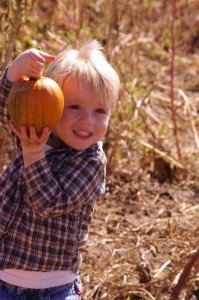 It is estimated that they gave away 30,000 to 50,000 pumpkins per year.  In addition to pumpkins, the farm sells corn, alfalfa, asparagus, cabbage, peas, beans, and rhubarb.  They also sell eggs, beef, and pork.

But in the fall of 2002, the Venetucci Pumpkin Farm sat silent.  For the first time in his lifetime, the drought made it impossible to plant his beloved crops.  Never having children of their own, Nick and Bambi considered all of the schoolchildren theirs, and loved to interact with them.  Brokenhearted with the silence that year, the Venetucci’s contacted the Pikes Peak Community Foundation and made arrangements to turn the Venetucci Pumpkin Farm over at the time of Nick’s death.

Well loved by most people in town, Nick died in September of 2004 at the age of 95.  He did not live to see the unveiling of the beautiful bronze statue that was erected in his honor at the Pioneers Museum in Downtown Colorado Springs.  Millions of pennies were donated by area schoolchildren, and the $100,000 statue, surrounded by pumpkin vines, is a beautiful likeness of the man that was affectionately known as “The Pumpkin Man.”