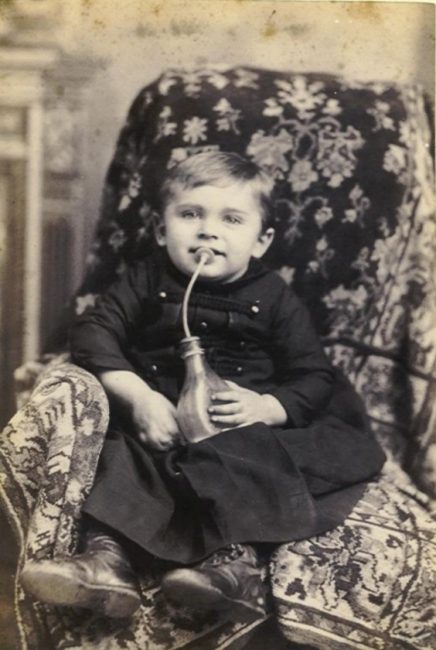 As many of you know, my niche market is Victorian and Vintage homes.  While I would not have wanted to live during that era, I am fascinated by homes, stories, and most items of that time period.

In England during the Victorian years, approximately HALF of all babies born alive died prior to their first birthday.  Even worse, only two out of ten ~ a staggering statistic ~ reached their second birthday.  Sanitation was deplorable, and people did not yet understand the value in sterilization.  Hygiene was essentially unheard of. 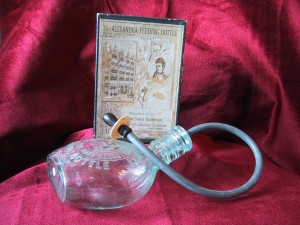 Always trying to make their lives easier, there were many inventions for mothers to help them take care of their children.  One such gadget was a baby-feeding device with affectionate names, one of which was “mummies’ darling.”  It was popular because the baby could be left unattended during feeding, long before the baby was old enough to hold a bottle.  The Princess of Wales was very popular during the 1880’s, so these bottles became commonly referred to as “The Alexandria,” honoring their beloved Princess.

The Alexandria was a glass baby bottle with a stopper that had a glass straw in it.  A long rubber tube was fitted to the glass straw, and on the other end was a rubber nipple with a bone mouth shield.  Even though the bottle was sold with a brush, it was almost impossible to keep clean. 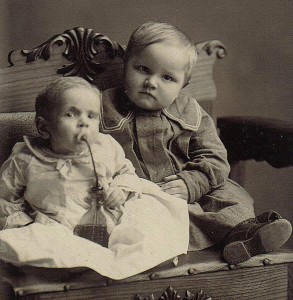 Unbeknownst to the unhygienic Victorians, the rubber tube was a collection area of deadly bacteria.  Before long, “my little pet” became commonly referred to as “The Killer” or “The Murderer.”  Amazingly, while doctors openly condemned this contraption, it remained popular for decades.

While there may be many romantic notions of living during that era, the reality of 80% infant mortality prior to their second birthday would have made life a very difficult trial, indeed.