What I learned in kindergarten

One of my grandsons started Kindergarten this week. Another grandson will start pre-school next week. When the question came up of what do you remember about kindergarten and how did it shape who you are, it made me a little sad.

When we remember those times, it’s not that you forget more as you get further away from them with age, but the truth is you probably didn’t remember many of them even when you were in high school.

I spend a lot of time trying to make things happy for my grandchildren. What made me sad thinking of this was that most of the things that have come before now, the places we’ve gone and the things we’ve done, they probably won’t remember five years from now.

My teenage granddaughter doesn’t remember most things from when she was in kindergarten, but even if and though they don’t remember specifics, it is the love and the joy that we’ve shared that will help to shape them into the adults that they will become. 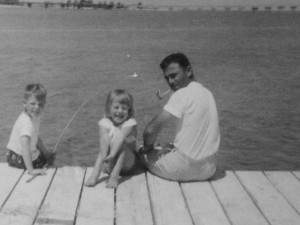 I have quite a few memories that come to mind during that time in Fullerton, California in the late 1950s when Eisenhower was President and there was an innocence in the land. We lived on a street in a newer subdivision, and at the end of the street was an orange grove. My father worked for the government and we moved around a lot, never staying in one place much more than a year.

I was the youngest of four children – the perfect family – boy, girl, boy, girl. I loved the moving and the meeting of new people and the excitement of change. That has stayed with me most of my life, and is one thing that makes me such a good Realtor. Our home in Fullerton was very typical 1950 California vintage, with a flat sloping roof and popcorn ceilings. My sister was six years older than I, and she and I shared a room. There were lots and lots of kids in the neighborhood, and it was a joyful time of playing and being carefree and becoming aware.

We played hide and seek in the orange groves often with lots of kids. One lesson I learned was that when you are younger and a new kid on the block, the older kids get to boss you around and make YOU the seeker, and you’re just happy they include you in the fun. That feeling stayed with me until college.

I remember visiting my grandfather and helping with the dishes (there was no dishwasher). I stood on a stool to be tall enough to reach the counter, and I picked up some silverware with the dishtowel and started drying the pieces individually. I remember my precious grandfather stopping and telling me how proud he was that my hands weren’t touching the silverware, and I was doing it exactly right.  That taught me a lifelong lesson that praising other people can change their day and their opinion of themselves, even if it’s just about the little things. 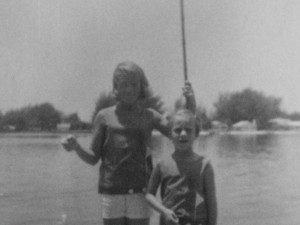 My older sister, Susan, liked to tease her younger sibling, and two stories stand out vividly. There were a lot of vultures or buzzards that circled around our neighborhood. One day she told me I needed to be really careful because they loved to swoop down and take little girls away and eat them. So for a long time I would sneak out the front door and scramble to the nearest bush and wait to make sure that there were no buzzards.

I can still see that little girl in my mind’s eye rushing from bush to tree, scrambling across the street to the nearest bush, making sure the coast was clear and that I would not be taken away to be a bird’s dinner. That lasted until my mother saw me one day, and after finding out what I was doing, they punished my sister. It took a long time for me to walk across the street normally, however.

Another story my sister told was on Christmas Eve. She woke me up and called me excitedly to tell me that Santa had just left our roof and to come quickly so I could see him. I ran to the window and looked to where she was pointing in the sky, and she kept saying, “Can you see him, can you see him?” Of COURSE I could see him in my vivid mind’s eye, and I was just as excited as she was. Until both of my brothers came into the room laughing at me and the three of them made fun of me because I was so gullible. Those two instances made me vulnerable, and taught me I never wanted to be anyone’s fool again. That lesson stayed with me for decades. (What am I saying, I still have issues with that.) 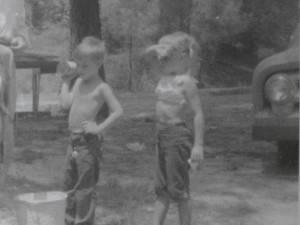 In the evenings, the parents would sit in lawn chairs in the driveways while the kids played in the streets. It was hot, and at the age of five I would play in just my shorts. I vividly remember the day I was playing with the other kids and realized I didn’t have a shirt on. I hid behind a car and begged my mom to bring me a top. She just smiled sweetly and brought it. It was a great life lesson that it is best to wear a shirt when you go out in public. That is a principle I still hold to.

My mother’s cousin came to visit from Australia one day. I was crazy about her, and she promised she would come the next morning at 10:00 and take my brother and me to Disney Land for the day. We waited and waited on the front porch for two hours and she never came. The lesson I learned that day was, no matter how much you love them, they will let you down at some point. It’s life. Deal with it. 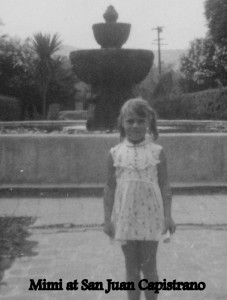 I have quite a few more memories, but my most vivid, and the last one that I will share, is about Roger. Roger was my kindergarten crush, and I adored him. A little heavy set with such a sweet spirit, I followed him around with total hero worship. We were on the playground on Halloween, and Roger had on an elephant costume. I wanted Roger to pay attention to me (also something that I learned in kindergarten), and I grabbed the tail of his costume. Imagine my horror when the tail came off in my hand. I was so amazed when Roger told me it was not a problem, but it humiliated me beyond belief, and I ran off to hide and cry.

A while later, Roger’s mother found me hiding in a corner. She had come to school and sewn the tail back on. She sat with me and hugged me and told me it was not a problem to concern myself with, and that it was one that was easy to fix. She took me back to the classroom, and while I was still embarrassed, I went back proudly because she went with me and was very nice to me in front of the rest of the class. I have thought of her kindness many times throughout the years, and learned two great lessons in that ~ don’t sweat the small stuff, and kindness can go a long way to changing someone’s world.

1 thought on “What I learned in kindergarten”