Home » Will work for food

It had been a stressful week. My husband and I were restoring a Victorian home in Downtown Colorado Springs that was Under Contract and scheduled to close in about ten days. It was the third day in a row that we had trouble getting contractors from different professions to show up when they said they would.

It was during that time that my husband and I decided that this would be the last time that we would ever count on others to help us reach deadlines. The next time we restored a home, we would do it ourselves. There wasn’t much that we couldn’t do ~ from roof to foundation and everything in between. That was also the time that he decided to get his General Contractor’s license and I decided to get my real estate license. 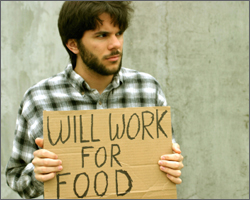 But on this particular day, I was angry and frustrated that no one ever seemed to do what they said they were going to do when they said they were going to do it, and we were running out of time. As I drove back from the hardware store with supplies in the back of my husband’s pickup, I had been mentally planning on what it was going to take for just the two of us to finish the work. I knew if we had a schedule that we carefully stuck to, that we would be able to get it done ~ IF there were no surprises.

As I pulled up to a red light, there was a man sitting in the middle of the median flying a “Will work for food” sign. I rolled down the window and asked him if he was sober enough to work ~ or was he just looking for a hand-out? He said, “No, ma’am, I’m the hardest worker you’ll ever find.” I asked him if he wanted a job for the next few days, and he said, “I have a few friends that are also good workers. Would you have enough work for them too?”

I have a pretty discerning spirit and felt no threat from this person at all. He climbed into the back of the truck, and we stopped at three more street corners picking up various friends. “Skip” seemed to be the leader of this pack of homeless men, and they were all polite and eager to work.

My dear husband was not at all surprised when I showed up and they began unloading supplies. After briefly explaining the situation (it is SO wonderful to be married to someone who has complete faith in you), we decided that the best course of events would be for us to work at this vacant Victorian and have them help with the labor.

Within minutes it was obvious that Skip was the leader of these tramps (their preferred moniker) and his crew was a well-oiled machine. Polite, eager, the best workers we had ever hired, it was exciting to watch the magic that happened and the interaction among them. When I brought them lunch a few hours later, they all tried to pay me for it. By this time, working along side them, I had a pretty good idea of who they were and had no concerns at all to their basic character. 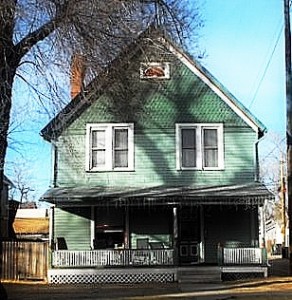 I explained that, in addition to their hourly wage, we would also provide their meals. AND if they wanted to, they could stay in the vacant house that we were working on since they were all homeless. A bond was formed in that moment that has lasted almost two decades.

We lived on the block where this house was located, and over the next few days, when the work was finished at the end of the day and they had all cleaned up, my girls and I would sit on the front porch and listen to some of the most fascinating stories we had ever heard. It was an amazing time, a time of opening horizons and learning about other ways of life. A time of finding out how truly blessed we are. A time of really learning that, just because people live a different lifestyle than what we consider ‘normal,’ that there are good people everywhere.

The entire experience was truly a blessing ~ including, in retrospect, the original workers who didn’t show up. A few times a year when Skip was riding thru town on a rail, he would pop in to see if we had any work for him. He would have protected any one of us with his life, and he became part of our family.

He has settled in Tacoma WA now, which in and of itself is one of the most incredible parts of this story. So I would encourage you to trust your gut. Good or bad, LISTEN to your initial instincts and apply reason. But if you open your mind to new and different possibilities, you may just find that the world is a whole lot bigger than the little box we live in and understand.

3 thoughts on “Will work for food”