For as long as I can remember, I have loved Victorian homes. When I bought my first house, all I really wanted was something vintage. The more real estate I sold, the more I realized that my passion was in the Downtown area, and my heart was always drawn to the character and uniqueness of houses that, in Colorado Springs, were built between 1880 and 1930. 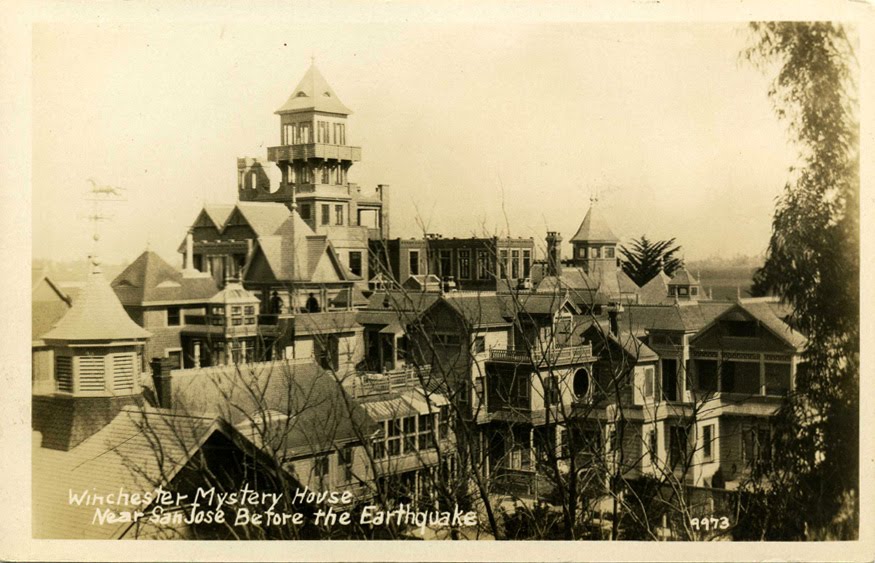 However, one of my favorite Victorians is not in Colorado. This picture is not a town, but is, in fact, just one home – The Winchester Mystery House in San Jose, California.  Following the deaths of her infant daughter in 1866 from a mysterious disease, and her beloved husband William 15 years later, Sarah Winchester was devastated, and sank into a depression from which she never truly recovered. An accomplished pianist who spoke four languages, she was known as “The Belle of New Haven.” She inherited twenty million dollars from the Winchester Rifle fortune when William died, but that did nothing to ease her pain. She became reclusive and withdrew completely from society. On the recommendation of a friend, she consulted a psychic.

The psychic evoked the spirit of Sarah’s late husband who told her that she and her family were cursed. That thousands of souls killed by Winchester rifles had come back to seek revenge. That the only way that she could escape their wrath and have eternal life was to move west and devote the rest of her life to building a house for these vengeful spirits; that she would remain unharmed as long as work on the house never ceased. In 1884, Sarah moved to Santa Clara Valley in California, purchased 160 acres, and embarked on a construction project that would last for the next 38 years.

The work on the Winchester Mystery House went on around the clock, and Sarah lived in the house as it was being built. She was generous to her workmen, local charities, and invited the neighborhood children to play on the grounds, to come in to her home to play the piano or to have ice cream. But every night she consulted with the spirits in her secret séance room about what part of the house should be built next. There was a bell tower that rang every night at midnight to invite the spirits for the nightly session, and then rang at 2 a.m. again to signal them to leave. Certainly this was no ordinary home.

Many of the doors opened to a wall. 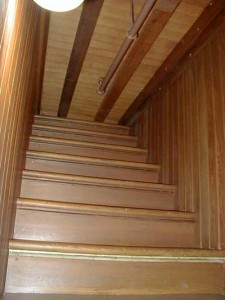 Several stairways led to a ceiling with no opening.  One of the doors in her bedroom opened to thin air, with a 10-foot drop. There are upside down columns, windows built into floors, and a cupboard that is only half an inch deep. There are secret passageways in the walls, and current guests are warned not to stray from the group or they could be lost for hours! Tradition holds that spirits enter a dwelling through a chimney, and Sarah built over 40 of them. One of them is four stories tall, but stops just shy of the roof, rendering it useless. But that didn’t matter because most of the rooms in the house were never used anyway.

A beautiful Tiffany-imported glass window that was originally on an outside wall was enclosed and is now forever blocked from the sunlight. Homes at the time were being built for approximately $1,000. One of Sarah’s ballrooms cost $9,000. At the time of her death, she had spent $5.5 million on the Victorian-style mansion which was lavishly decorated with the most expensive furnishings money could buy. It eventually grew to over 160 rooms, covered six acres, featured over 10,000 windows, 2,000 doors, and a beautiful 4.5 acre garden.

Was she possessed? Inspired? Eerily eccentric? Or just plain crazy? Some said she kept her face covered at all times with a dark veil, and was known to fire servants who caught a glimpse of her face accidentally. This was not true, however, in her later years.  She never slept in the same bedroom two nights in a row so that she could confuse any evil spirits that might be waiting for her. She also traveled through her house in a roundabout fashion to confuse mischievous ghosts.

An earthquake in 1906 toppled a seven-story observation tower and caused other damage to the house. Sarah had the front half of the house sealed off because she feared the spirits were angry because that part of the house was nearly finished. 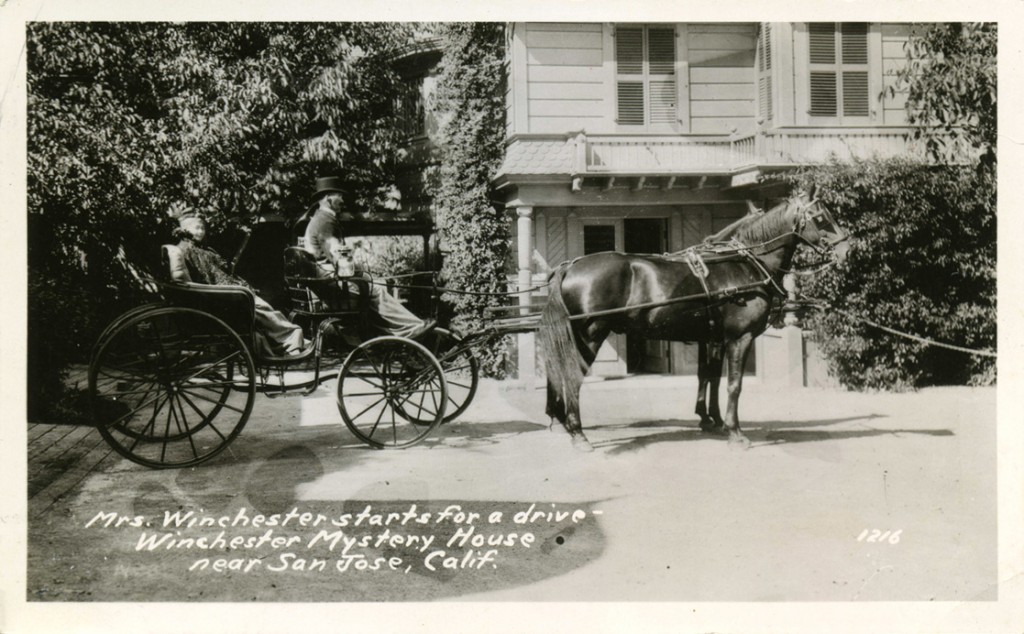 Number 13 seemed to be of particular importance to Sarah and her ghostly advisors. All windows had 13 panels. There were 13 bathrooms, and a sink in one of them had 13 drainage holes. Each staircase (except one) had 13 steps. Each chandelier featured 13 lights. There were 13 coat hangers in Sarah’s secret séance room, holding her 13 nightgowns.

The construction, which went on 24-hours a day, 7 days a week for 38 years, ended abruptly when Sarah passed away in 1922 at the age of 83. In her will (divided in 13 parts and signed 13 times) she never mentioned her house. She did take care of her servants, and left her furniture and art collection to her niece. The house was sold at an auction. Except for maintenance and restoration, the house remains today in the same condition it was on the day she died.

Some say that Sarah’s spirit still roams the hallways of Winchester House. Some say that’s rubbish, and the house is just a quirky and pixilated work of a disturbed woman. 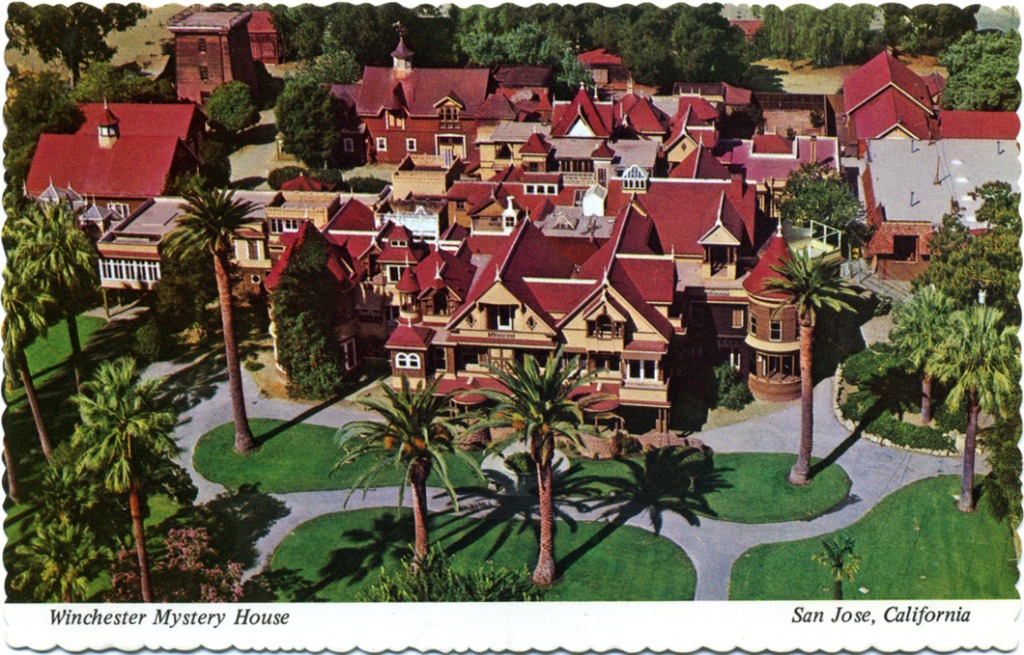